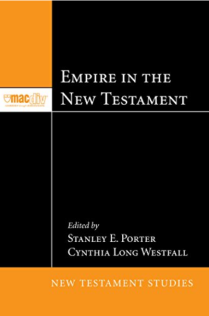 In the Shadow of Empire: Reclaiming the Bible as a History of Faithful Resistance, Richard Horsley (ed) 2008

An Introduction to Empire in the New Testament, Adam Winn (ed) 2016

I have begun this writing project (Subversive Church) with six blog posts of the context of Empire and Kingdom on the New Testament and the earliest followers of Jesus. (See Blog Outline. ) The first 3, blogs 2-4, lay out the effects of Empire, the next three, 5-7, show Jesus’ responded to Caesar’s oppressive, violence-centered empire with his preaching and living the Kingdom of God.

I will write further blogs on these two issues. But I want for the moment to turn from context to text, from Empire to Scripture.

When I began several years ago reading about this recent biblical research, I tried in vain to find a term these scholars agreed on for this new thing they were laying out. I knew it had to do with the effect of the Roman Empire on the New Testament. But ‘empire…’ what? Concurrently I was studying a second body of academic research on the unknown first two centuries of Christianity. But this other group were clear about what their topic was. They were explicating the most common social structure for common people of that period, which classical scholars called “The Greco-Roman Meals’. The weekly/monthly banquet gatherings were called “voluntary associations” .

I finally discovered that some of them, the empire folk, when they bothered giving it a name, called it ‘empire criticism’. I have found that term vague and unhelpful. On one level, there is the problem of the difference of meaning of ‘criticism’ in academic dialogue as compared with vernacular use of the word. Further, are we speaking of a critique of the empire or by the empire? In my writings here so far, I have tended to use the more neutral expression ‘empire scholarship’. I’ll add more to what we might call it as I get to the third book and Adam Winn, its editor.

We might not be sure what to call this topic, but there is no question of who is the pioneer of the field. Richard Horsley, Distinguished Professor of Liberal Arts and the Study of Religion at the University of Massachusetts Boston until his retirement in 2007, has been writing on this since the 1980s, when he was a lonely voice. His over 20 books, written or edited, have set the stage for the flood of books by others, who have bought Horsley’s point of the relevance of empire for New Testament studies.

When time came to produce a volume to show the effect of the Roman Empire on the Bible, it was no accident that Westminster John Knox Press chose Horsley to bring it together. His vision for the book was to show that God’s people had lived “In the Shadow of [some] Empire” for just about all their existence: from the grinding labor required of them by the Pharaoh through empire after empire, until and including the time of the New Testament. Thus, his book includes among its nine chapters, three on pre-Roman empires, three on aspects of the Roman Empire, and three on specific books of the N. T. as they are affected by their imperial Roman context.

Introduction: The Bible and Empires  by Richard A. Horsley

Three years later, another like compendium came out. This time the origin was McMaster Divinity College in Hamilton, Ontario, Canada. Its editors are Stanley Porter, president of the seminary, and Cynthia Long Westfall, a N. T. professor at McMaster. The book, like “In the Shadow of Empire”, contains nine chapters.

Introduction: Empire, the New Testament, and Beyond

Only two chapters are devoted to the effect of pre-Roman empires on God’s people. No chapters are focused on the nature of imperial Rome. This leaves 7 chapters to cover N. T. books and even beyond into the church Fathers. Note that both books’ editors have one overlapping writer. In both, the Gospel of Matthew is covered by Warren Carter, a N. T. scholar from New Zealand who teaches at Brite Seminary in Dallas.

Five years after “Empire in the N T”, comes a third compendium. Editor, Adam Winn teaches at Azusa Pacific University and Fuller Theological Seminary, giving the imprimatur of the evangelical community to this new field of study. For purpose of naming this ‘empire thing’, not only are they comfortable with ‘empire studies’ and ‘empire theory’ as terms, Winn’s introductory chapter lays out a rationale for new readers to this subject a recent history to understand empire studies as a matter to be taken seriously.

AN INTRODUCTION TO EMPIRE IN THE NEW TESTAMENT (Published 6- 2016)

This book’s layout is longer, and includes fourteen chapters. As mentioned earlier, this recognition of the role of the Roman Empire has progressed to where the editor, Winn, devotes a chapter to spelling out this new concentration on the Roman Empire. Speaking of the prior role of the empire on scripture impact he writes: “But few interpreters considered the way in which the Roman Empire and its ubiquitous power and influence might be a foreground for understanding Christian theological expression, mission, and practice. Few New Testament interpreters considered ways in which New Testament texts might be critiquing the evils of the Roman Empire. The prevailing assumption was that the writings of the New Testament were apolitical.”

There follow two chapters which look at the empire; one of these is written by Richard Horsley. A full eleven chapters cover books of the N.T., which encompasses quite a sweep of them. As in the previous volumes, Warren Carter is once again called upon to write on Matthew’s Gospel. Uniquely, three chapters are devoted to the Pauline epistles. The chapters differentiate those letters which are considered by Paul himself or by later more conservative persons who write under Paul’s name. This is like Borg and Crossan scheme in their “The First Paul” with the radical Paul, the conservative Paul and the reactionary Paul. Each ‘Paul’ is more accommodating to the empire than the previous one.

My purpose for writing this review of these three books is not that I am recommending you need to purchase all three. Each of these does an overview in its own way. My purpose is to lay out the similarities and differences so that you might decide which of the three most fits your interests. If you want the full panorama of the effect of empire on the whole of Biblical history, then “In the Shadow of Empire” is your book. If you want to drill down on empire’s effect on the writing of the N. T. books, then “An Introduction to Empire in the New Testament” is what you want. Porter’s book, “”Empire in the New Testament” holds the middle ground between the other two.

And, if all three of these are too generalised for your taste, you may want to look at the more than 30 books on specific N. T. books I list in my bibliography. They are found in Section II B Specific book(s) of the New Testament.